Welcome to the first installment of "Cribbage Analysis - Tips & Strategy"!

Cribbage Pro is the most popular cribbage application for mobile devices and the only one offering cross-platform multiplayer today. We have hosted millions of online multiplayer games since releasing Cribbage Pro Online in 2009. The cribbage community has been very good to us, and we would like to continue to give back whenever we can. So, we will be publishing several articles about cribbage over the next few months, based on actual data from Cribbage Pro multiplayer games to help you develop your cribbage skill and strategy both when playing in Cribbage Pro or in the "real world".  You should subscribe (link on the right) to this blog now to get the very latest tips and analysis as soon as it is available and if you don't have Cribbage Pro yet, go download Cribbage Pro now so you can "play along".

In online multiplayer games we track every game played, including every hand dealt, every card played and every point scored. Armed with our database of millions of hands we can analyze the game in ways that nobody has ever attempted, based on real players playing real games against other real players. Want to know how to play 6-7-8-9? We have seen it played tens of thousands of times, and we know what has worked out best. Should you pair your opponent's lead? We have the data on that too, and we'll be sharing that and much more with you on this blog in the coming weeks.

One of the first questions you will probably have is about privacy in all of this data we are collecting. As our EULA states, all our analysis is done anonymously and in aggregate. We know that thousands of players like to lead a 4 from 4-5-6-6, but we don't track the corresponding names, addresses, or anything else about them and we secure the data using some of the best security technology available. You can rest assured that you can play online without worrying about your privacy. And please don't lead the 4 from 4-5-6-6!

With that out of the way, I would like to acknowledge the hard work of Aaron Harsh in pulling all of this together (more about Aaron in the guest post tag line at the bottom). Aaron has spent a lot of time and effort on pulling all of this together, and we are very grateful for his willingness to do all that work and be a guest author for us on the blog. Everything you read below comes directly from Aaron and his analysis of the data provided unless otherwise noted.

First topic: What makes the good players so darn good?

(Editor's Note: View your total win percentage by selecting the statistics button in Cribbage Pro. Refer to the footnote for how this is different than the calculation used here. When considering just "raw" data that includes forfeits and manual counting games, roughly 30% have a 53% or better win rate and 10% are at 60% or better) 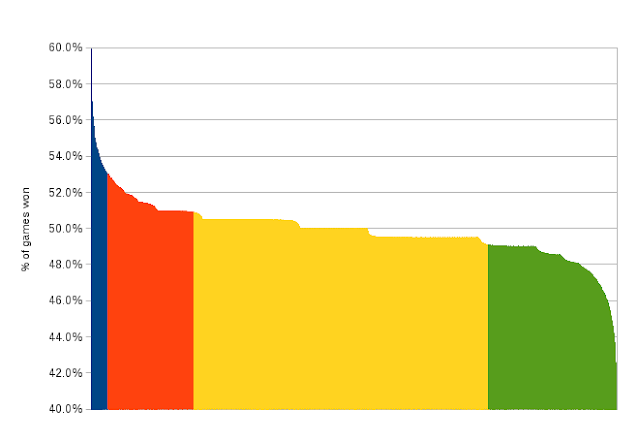 The As are in blue, Bs in orange, Cs in yellow, and the Ds are in green. Those As are on a completely different level from the masses in group "C", but they're still not winning anywhere near 100% of the time. It looks like a 56% winning average across a large number of games would be a good goal. So how do we accomplish that? What are the great players doing differently than the casual player? Well, for starters..

No surprise here: great players score more points than casual players. The surprise is that they're not scoring that many more points:

Let's break those numbers down a little:


Points as dealer, by player's rank

The non-dealer numbers are about what you'd expect:


Points as non-dealer, by player's rank

Here's the complement to the first table we saw: average points per hand, based on the opponent's skill level.

Let's break those numbers down and see where the difference is coming from:


Points as dealer, by opponent's rank


Points as non-dealer, by opponent's rank

One interesting point in this data -- players' hands contain slightly fewer points when they're playing better opponents. A player can't directly affect the number of points in her opponent's hand, so what's going on here? Is this because the players are keeping different cards in an attempt to peg more? Or is this because the opponents get so far behind they make rash decisions in an attempt to catch up? Maybe we'll investigate this in a future blog post.

Executive summary: in two hands (one as dealer, one as non-dealer), a great player will score 0.34 more points than a D player, and he'll lower his opponent's score by 0.37 points. Altogether, an A player has net advantage of 0.70 points per hand. The A players score more points, and their opponents score fewer points.

Better players play differently based on their board position

An understanding of board position is probably the biggest different between a great player and the rest. It's a little deep for our first blog entry, though, so let's save it for future blog posts.

That's it for today

We'll dig deeper into all these topics in future blog posts. Do you have something in particular you'd like us to look at? Leave us a comment and we'll see what we can do.

—
1. To be precise, we've ranked each player based on a Bayesian posterior mean of the player's win rate, to take into account the number of games played. The more games a player plays, the closer their ranking will be to their win percentage. We've also excluded manual-count games since we want to identify players with good strategy, rather than players with good counting abilities. The formula used is: (25 + # games won) / (50 + # games played) where "games won" and "games played" are the number observed in the sample.

Editor's Note: This is a guest post by Aaron Harsh. Aaron lives in Portland, Oregon with his wife Stacy and daughter Audrey. He spends his evenings analyzing cribbage strategy for Fuller Systems, and his days analyzing television viewership for Rentrak Corporation's Advanced Media & Information group. You can play him on Cribbage Pro Online as user "aaronhars", or in person at American Cribbage Congress grassroots club #28 (Oregon's Finest).
Posted by Fuller Systems, Inc. at 9:36 AM