How to choose your strategy

We’ll get to the gory details below, but here’s an executive summary to get you started. When your score is close to your opponent’s (and it frequently is), you can use the table below to help decide your strategy. Follow these steps:

We’re going to dig into the gory details now, but if you want some more advice on what exactly “offense” and “defense” mean you can just skip to the end of the article.

Remember, look up your estimated end-of-hand score on the board (and in the table), not your current score.

Where did these strategies come from? Let’s take another look at our chart from last week, which shows the probability the dealer will win based on dealer’s and pone’s scores immediately before the deal: 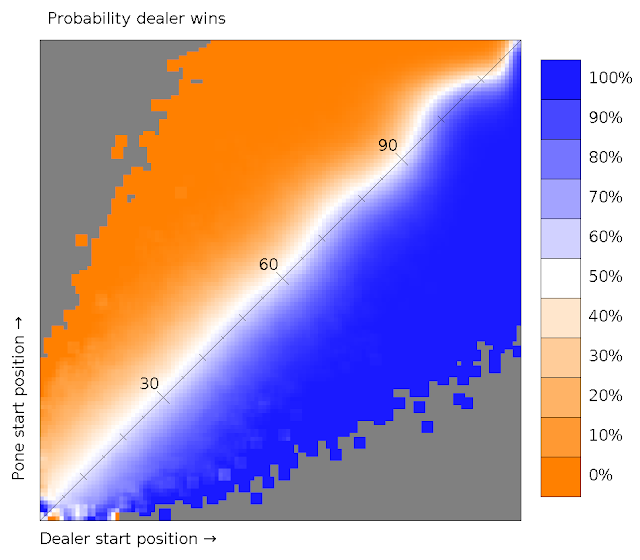 Remember that the point of offensive play is to score points even at the risk of letting your opponent score. So let’s see what would happen to dealer’s chances of winning if she had played offensively, and each player had pegged an additional two points above and beyond what they would have scored with typical play: 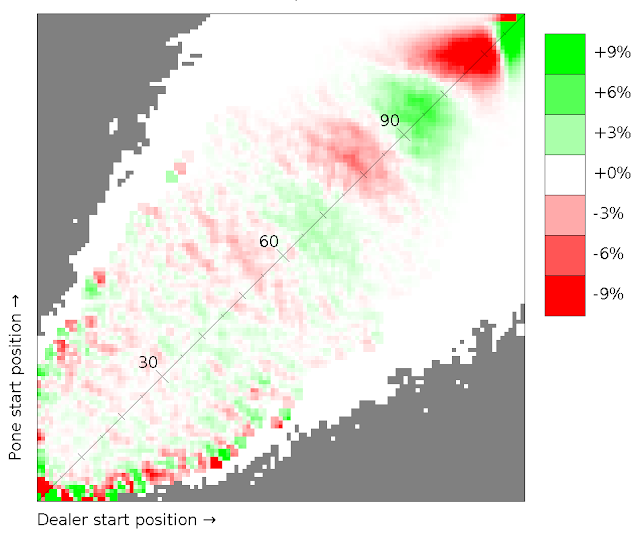 These charts are getting more and more complicated, and this one deserves a little explanation. This chart shows the increase or decrease in the probability that the current dealer would win if both dealer and pone had scored an additional 2 points in a previous deal. Or to put it another way, it tells us whether or not the dealer should have played offensively on her previous hands. The chart is marked green in areas where the dealer is more likely to win when both players scores are increased by two, and red where the dealer is more likely to lose.

Looking at our first (orange/blue) chart, we can see that the dealer has a 59% chance of winning the game when the score is tied at 95 (one line past the one labeled “90”). If the score were tied at 97 (that is, if each player had scored 2 more points), the dealer would instead have a 65% chance of going on to win. (I know it’s hard to tell the difference between a 59% and a 65% on that first chart -- you’ll have to trust me that those are the correct numbers). If dealer had played her previous hand more aggressively she’d be in a better position to win: an extra two points for dealer and for her opponent would actually give dealer an extra 6% chance of winning (65% - 59%). Because of this the chart shows a nice bright green at position 97/97. 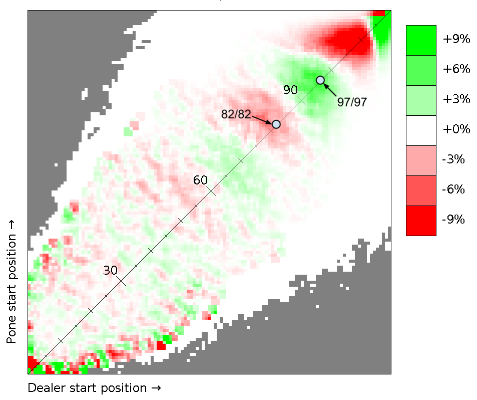 Use the red and green blobs to your advantage

For example, let’s say you’re at hole 85 as pone, with dealer at hole 80. You keep 6-6-7-8 in your hand, and dealer cuts a 10. You've got 10 points in your hand, so you’ll start in hole 95 next turn if you don’t peg. Dealer averages 16 points (between hand, crib, and pegging), so she’ll probably start around hole 96 next turn. Looking at our chart you see that 95/96 points for dealer/pone puts you squarely inside a green section of the chart. You’d like to start further ahead, so if you see the opportunity to peg a few extra points you should take it, even if it means giving your opponent a few points, too.

If the positions were reversed (you as dealer from hole 80, pone starting at 85) you should reverse your strategy and play defensively.

Play for position or play for points?

Note that the strength of the colors increases as you get closer to the end of the game, which means the importance of offensive and defensive play increases as the game goes on. Our chart shows a very faint pink area around 25 or 30 points. That early in the game the effects of correct offensive or defensive play are so small that it’s probably better not to concentrate on offense or defense, and instead to focus on increasing your lead over your opponent (or catching up with her).

Exercise moderate offense or defense between 60 and 86 points

Position really starts to be important after you’re halfway through the game, as shown by the darker green and red blobs. When you and your opponent are between 60 and 86 points you should start practicing moderate offense or defense: try to manipulate your opponent’s position without sacrificing too many points.


Exercise serious offense or defense between 87 and 109 points

Between 87 and 119 points things you've started getting into the endgame, and the importance of positional play has become very important. Proper positional play here can make a big difference in your win rate. Start playing serious offense or defense, depending on where your end-of-hand score puts you on the board.

On the other hand, if you’re going to start in this position as pone you shouldn't play particularly offensively. You’ll count first, and you’ll likely go out before your opponent has a chance to count. Giving your opponent more points would just increase the chance that she’ll be close enough to peg out next turn.

That’s plenty for this week

That’s the end of a whirlwind tour of a dense topic. Do you have a specific hand you’re interested in analyzing? Would you like some advice on a tricky board position? Let us know and we’ll tell you how and when to play it for offense and defense. Just leave us a comment below.

Editor's Note: This is a guest post by Aaron Harsh continuing the series on cribbage strategy and tips. Aaron lives in Portland, Oregon with his wife Stacy and daughter Audrey. He spends his evenings analyzing cribbage strategy for Fuller Systems, and his days analyzing television viewership for Rentrak Corporation's Advanced Media & Information group. You can play him on Cribbage Pro Online as user "aaronhars", or in person at American Cribbage Congress grassroots club #28 (Oregon's Finest).
Posted by Fuller Systems, Inc. at 10:02 AM 29 comments: 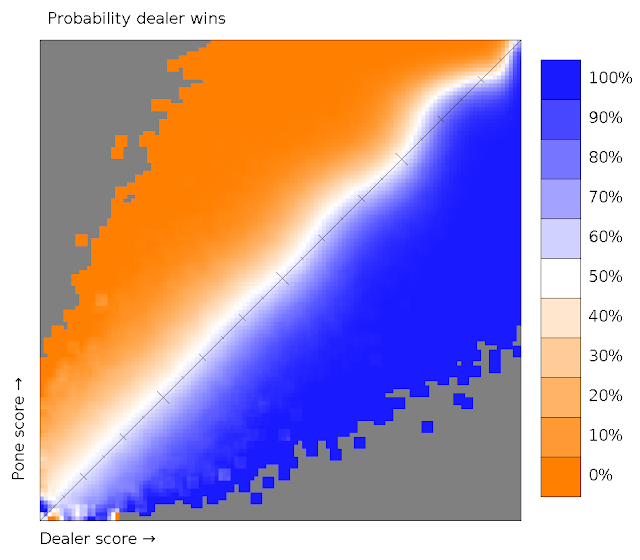 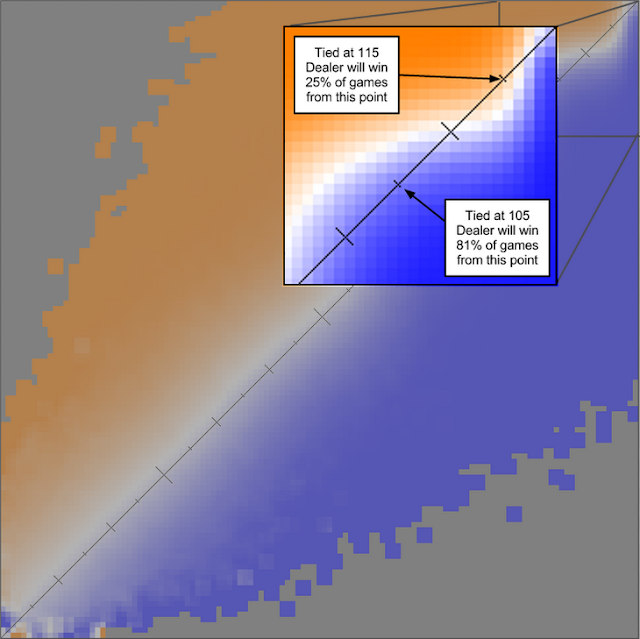 Editor's Note: This is a guest post by Aaron Harsh continuing the series on cribbage strategy and tips. Aaron lives in Portland, Oregon with his wife Stacy and daughter Audrey. He spends his evenings analyzing cribbage strategy for Fuller Systems, and his days analyzing television viewership for Rentrak Corporation's Advanced Media & Information group. You can play him on Cribbage Pro Online as user "aaronhars", or in person at American Cribbage Congress grassroots club #28 (Oregon's Finest).
Posted by Fuller Systems, Inc. at 11:22 AM 1 comment: