How Should You Respond to Pone’s Lead?


Today we’re going to talk about how dealer should respond to pone’s initial lead. As usual, all our figures are based on our database of millions of hands of actual cribbage play. None of this is guesswork on our part -- it’s all based on real games played by real players.

All our numbers are based on average dealer points pegged minus pone points pegged. So if dealer pegs 5 and pone pegs 3 we’ll consider that a net advantage of 2 points for the dealer. When we say something like “playing the 6 gives you an extra 1.3 advantage over playing the 3”, we mean “the difference between your score and your opponents will be, on average, 1.3 points larger if you play the 6 than if you play the 3”.

All the situations we describe below are relatively common. You won’t run into them every game, but you’ll see them often enough that playing them right will make a difference in your win rate.

These statistics don’t take into account situations where you want to play offensively or defensively. We’ll talk about offensive and defensive play in a future article, but for now you can use our recommendations as general guidelines for your play.

Before we get to the meat of the article, let’s talk about how big a difference a few points can make. Our data shows that 3.4% of games end up being decided by a single point. An average player winning 50% of her games will find herself stuck in the stink hole 50% * 3.4% = 1.7% of the time. If our average player fine tunes her strategy to squeeze out one more point per game she’d win those 1.7%.

Here’s a chart breaking down the difference between the winner’s final score (121), and the loser’s final score. These numbers only take into account games between two “A” level players. 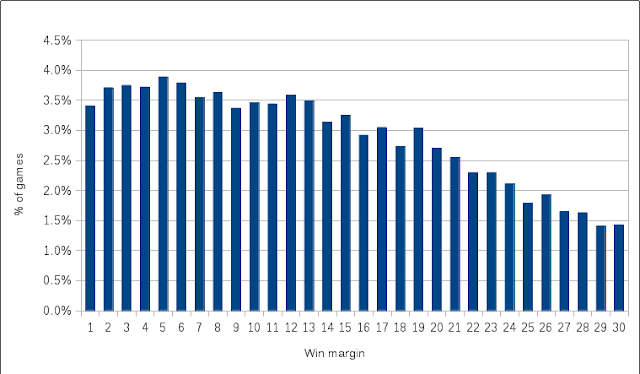 In this article we’ll show common mistakes players make that cost them a few points per game. If you use them to flesh out your strategy you should see yourself scoring an extra point or two, and making a noticeable difference in your win rate.

Why are so many people playing the 8 here? One theory is that they like to take the count to 11.  Pone will be nervous about playing a ten/face card to make the count 21, and might make a mistake. It’s not a bad idea, but the data shows you can score more by playing differently.

It’s more likely that she’s got a 2 and two face cards. When that happens you’re likely to score 31 for 2:

Executive summary, play the 3 instead of the 4 and you’ll gain 2.6 points on your opponent instead of just 1.3.

Some other popular hands

You’re holding 4-5-6-9 and pone leads the 7. A lot of players are playing the 4 here, but the 9 will, on average, give you an additional 1.6 points advantage over your opponent.

Dealer’s holding 5-10-J-K and opponent leads a king. We’ve seen that 48% of players will pair the king. The 5 is the better play, giving you an extra 2.2 point advantage over the king.

Let us know what you think

Want to see the results for another hand? Want more details on why these plays work so much better? Leave us a comment below and we'll get back to you.

Editor's Note: This is a guest post by Aaron Harsh continuing the series on cribbage strategy and tips. Aaron lives in Portland, Oregon with his wife Stacy and daughter Audrey. He spends his evenings analyzing cribbage strategy for Fuller Systems, and his days analyzing television viewership for Rentrak Corporation's Advanced Media & Information group. You can play him on Cribbage Pro Online as user "aaronhars", or in person at American Cribbage Congress grassroots club #28 (Oregon's Finest).
Posted by Fuller Systems, Inc. at 9:18 AM